NMSBA reduced my manufacturing costs by 20% and made it possible to build everything here in Albuquerque. We should have our first million dollars in sales within six months. 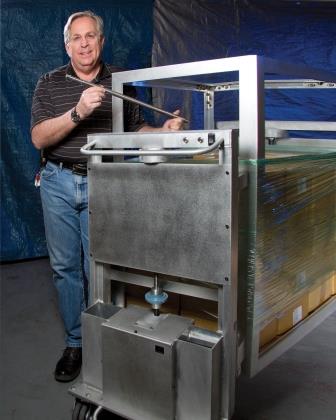 But Watts ran into problems when the electronics in the lift’s control system threatened to interfere with sensitive computer servers stored in the cabinets.

To resolve the problem, NMSBA paired Watts with mechanical engineer Jeff Dabling and his team of electronics experts at Sandia National Laboratories to evaluate the design of the MASS Lift’s control system. The team sourced a suitable motor and controller for Watts’ control system and also helped him incorporate a mechanical torque-limiting clutch and an electromagnetic brake into the controls
to hold the load suspended. The team’s suggestions not only added 500 more pounds of capacity to the lift, but the modifications also improved the lift’s safety features and its overall operational reliability.

The reworked control systems reduced Watts’ costs by 20% and allowed him to source and build his product entirely in Albuquerque. Watts signed a contract with Microsoft for one pair of MASS Lifts and expects a follow-up order of more than 50 units. He expects to make his first million dollars in sales within six months.