NMSBA gave me access to engineering prowess I just couldn’t find in the private sector. This helped us prove that our product does what we say it does. 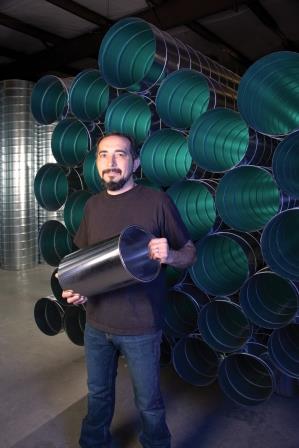 More than 25 years ago, Abenicio Sisneros and his sons began to install ductwork in homes throughout Belen. In 1990, they noticed a huge demand for prefabricated ductwork for all types of structures. That’s when Sisneros Bros. Mfg.shifted from installing ductwork to manufacturing it.

For several years, Sisneros Bros. Mfg. worked on developing a connection for ductwork that was leak-free and quick and easy to install. When the company went to market the product, customers were skeptical that the system could meet industry standards. Some customers asked for Sisneros Bros. Mfg. to have a third party evaluate the new system—only then would they be willing to invest in the new product.

Joaquin Sisneros approached NMSBA, which teamed the company with engineers Thomas Bosiljevac and John Robert Laing at Sandia National Laboratories. The two men possessed the engineering expertise to perform various tests and reviews of the company’s ductwork system. The engineers conducted tensile and lateral testing, as well as a comprehensive vacuum test.

As a result of Sandia’s work, Sisneros Bros. Mfg. invested $100,000 in equipment to begin manufacturing a whole new product line of leak-free ductwork. Production is expected to commence later in 2015 and will support two new jobs. The company anticipates sales of $250,000 of the new product to the semiconductor and pharmaceutical industries within the first year of production.